You are here:
Home  /   News Item  /   Working together to prevent suicide – 10 myths that need to be dispelled 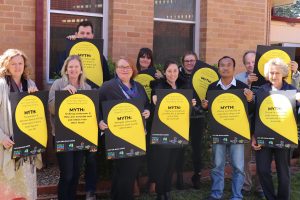 Today (10 September 2019) marks World Suicide Prevention Day (WSPD) and the Centre for Rural and Remote Mental Health (CRRMH) is shining a light on suicide by dispelling some common myths.

Director of the Centre for Rural and Remote Mental Health (CRRMH) Professor David Perkins said working collectively together to prevent suicide is important and we need to continue to raise awareness, encourage conversations and support one another.

“World Suicide Prevention Day provides an opportunity for each and every one of us to share our grief about those we have lost to suicide, speak about how we’re feeling and also share the responsibility of preventing suicide,” said Professor Perkins

Suicide prevention remains a universal challenge. Every year, suicide is among the top 20 leading causes of death globally for people of all ages. In rural areas in Australia, on average suicide rates are 50 percent higher than in city areas.

“We all have a part in helping to prevent suicide and this includes helping to dispel common myths and misinformation that can increase stigma, shame and guilt experienced by people who are thinking about or have attempted take their own life,” said Professor Perkins.

“Dispelling a common myth that there is nothing that can protect someone from suicide is critical.  While suicidal behaviour is complex, we know suicide is not inevitable and may be prevented.

“We know there are known protective factors against suicide such as social support and connectedness and access and availability to effective mental health care,” he said.

Suicide prevention is one of the Centre’s key priorities and this year the Centre hosted a third rural suicide prevention forum at the Sydney Royal Easter Show. This year the focus was on Community wellbeing collaboratives and the need for a coordinated approach as identified in our Rural Suicide and its Prevention: a CRRMH position paper: Focus Area 5, Build Healthy and Resilient Communities, as a strategy for medium to long term reduction in suicide deaths and rates.

“We need to find solutions to empower communities to create effective local suicide prevention strategies. Our work with Muswellbrook Healthy and Well is a great example of a community working together to prevent suicide,” said Professor Perkins.

“A key part of this is working towards developing mentally healthy communities using successful mental health promotion campaigns such as Act- Belong -Commit.

“We also need to build resilience and provide local solutions and support during tough times such as a drought,” he said.

The CRRMH welcomes the opportunity to partner with communities and organisations that wish to take action and have a positive impact on rural suicide prevention.

Learn how to identify the signs that someone may be struggling on R U OK’s website.

For pointers on how to start safe conversations around suicide check the #YouCanTalk campaign here.

APPENDIX -10 common myths about suicide that need to be dispelled

According to Suicide Prevention Australia, evidence shows that many people will communicate their suicidality, either directly or indirectly, to a health professional in the three months prior to their death.

Talking about an intent to die by suicide is a warning sign, it should be taken seriously and listened to.

–          Certain life skills such as problem-solving and resilience

Myth #03: If a person is serious about killing themselves, there’s nothing you can do

FACT: Often, feeling actively suicidal is temporary, even if someone has been feeling low, anxious or struggling to cope for a long period of time. This is why getting the right kind of support at the right time is so important.

Myth #04: People who talk about it aren’t serious and won’t go through with it

FACT: According to UK organisation Samaritans, people who die by suicide will have often told someone either discreetly, “Life is not worth living, I have no future…”, or directly about their intent on taking their own life.

If someone is talking about suicidal thoughts or behaviours it’s important to take them seriously. Helping them get the support they need could save their life.

Myth #05: Talking about suicide increases the risk of suicide

FACT: In a national survey by Colmar Brunton in 2017, almost 20% of Australians believed that talking about suicide increases the risk of suicide. According to Suicide Prevention Australia, openly discussing the topic of suicide can open the door for someone to get help.

Myth #06: There is a typical profile for a person who dies by suicide

FACT: Unfortunately, people of all ages, races, faiths, and cultures die by suicide, as do individuals from all walks of life and all income levels. However some priority populations, while not more at risk of suicidal behaviour, may experience greater rates of discrimination, isolation and/ or social exclusion which can impact on suicidal thinking and behaviour.

Myth #07: Only people with a mental illness are suicidal

Myth #08: Talking about suicide is harmful

FACT: Talking about the topic of suicide and facilitating help-seeking behaviour if they are faced with suicide ideation should be encouraged. There is no evidence to suggest that talking to someone about suicidal thoughts or behaviour is harmful.

Myth #09: Asking someone if they are suicidal will ‘put ideas into their head’.

FACT: The only way to assess suicide risk is to ask directly whether they are experiencing suicidal thoughts or engaging in suicidal behaviours, and experts generally agree that asking is unlikely to make the situation worse. Asking the question may be difficult, but it shows that you care.

Myth #10: Once someone is suicidal, he or she will always remain suicidal

FACT: Heightened suicide risk is often short-term and situation-specific. While suicidal thoughts may return, they are not permanent and an individual with previous suicidal ideation can go on to live a long life.