The CRRMH was awarded the Mental Health Foundation Australia “2019 Organisation of the Year Award” on 17 October, 2019.

The prestigious award was received by CRRMH Director, Prof. David Perkins and Senior Development Officer Vanessa Delaney at the launch event of Mental Health Month by the Foundation at Parliament House in Canberra. The award was presented by the Hon Alan Tudge MP, Minister for Population, Cities and Urban Infrastructure, who also presented awards to the 2019 Advocate of the Year and 2019 Volunteer of the Year.

The event was a very multicultural affair with entertainment by Bollywood and Chinese dance groups, and the Foundation’s Ambassadors representing a variety of cultures there to support the launch. A host of politicians also attended the event, including Minister for Health Greg Hunt, Shadow Minister for Health Chris Bowen, Shadow Assistant Minister for Mental Health Emma McBride, and Minister for Regional Services, Decentralisation and Local Government Mark Coulton. Federal Member for Calare Andrew Gee also took time out of his Parlimentary meetings to congratulate the Centre.

New connections and friendships were made and we look forward to working with the Foundation more as we humbly thank them for acknowledging our work in rural and remote mental health with this wonderful award. Congratulations to everyone at CRRMH and RAMHP whose work contributed to the award.

Click here for more information about the Mental Health Foundation of Australia. 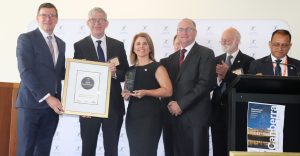