You are here:
Home  /   News Item  /   Getting to know Research Assistant, Kris Gottschall 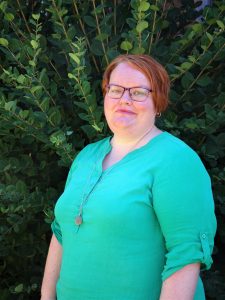 Kris, can you please tell us a little about yourself and your background?

I have been privileged to live and work on Wiradjuri country almost my whole life.

My parents were WWII refugees from Hungary and after my father’s family settled in Orange in the 1950s, they eventually started an orchard business. So, I grew up on an orchard only five minutes from the CRRMH building here at Bloomfield, Orange!

I completed all my schooling at public schools in Orange and then headed to the big smoke of Sydney to study Arts at Sydney University. My favourite subjects were history and film studies, and I had much fun in the Uni’s dramatic society. After living in Sydney for a few years I realised that regional life was a good life, so I returned to the Central West. After some fun at the Orange Ag. Research Station looking at bugs through microscopes, a few years later, I found myself as a research assistant on a large ARC rural teacher education project at Charles Sturt University (CSU) in Bathurst. The Professor I worked for convinced me to do a PhD in Education, and I got a scholarship to do so in 2006. My PhD was about Aussie films and youth-hood. During this time I was also teaching undergraduates in the Education faculty, around the social and cultural politics of education. Later, I specialised in Indigenous Education and had full-time academic appointments at the Australian Catholic University and CSU.

I came to the CRRMH from the School of Indigenous Australian Studies at CSU, where we were engaging students across all CSU faculties in Indigenous Australian culture, history and contemporary contexts.  My research was in the areas of popular and public pedagogies, school marketisation, popular film culture, post-structural theories, social semiotics, subjectivities, gender, Indigeneity and discourses about youth-hood.

My hubby and I recently bought a house in Bathurst, where we live with our two small rescue dogs, Frankie the Jack Russell and Rudi ‘Roods’, the Foxie-Chihuahua X. We also spend much time in Orange, out on the orchard with my 83-year old dad, who, like all old farmers, refuses to retire from the farm life.

What attracted you to this new role working in the rural mental health space?

I was  attracted to working in a team focused on a collective goal. Academia can often be a bit of a lonesome existence, so I jumped at the opportunity to be in a positive and productive team environment. The Centre is also for rural people, run by rural people and is in a rural setting.  The promotion of better mental health and better mental health services for rural people is important and timely. The inclusive nature of CRRMH programs and partnerships was attractive to me, especially from my Indigenous Studies background. I also appreciate that all the work of the Centre is evidence-based and that the research by the Centre is significant in this regard.

What are you looking forward to most about working with the research team?

To have one’s head in research on a full-time basis is a privilege and a highly prized role in academic circles! Being able to bounce ideas off the team, to share ideas and be challenged, is an awesome way to spend one’s day! Drawing from the expertise of the Centre’s researchers, and the University of Newcastle more widely, is something I will look forward to. Clearly the research of the Centre informs works around good mental health and good mental health in rural settings, and it is exciting to think that our research will inform policy and what goes on in health.

What are some of your favourite activities that you do to keep mentally healthy?

I love a good binge-worthy TV series, reading a good book, playing the ukulele, fancy dress parties, walking my high energy dogs, and road-tripping with my hubby. A good natter and coffee with friends is also a must!

What’s the most interesting place you’ve ever been?

Recently, my hubby and I were bush-walking on the Central Coast, in the Munmorah State Conservation Park. We came across a spot that seemed to have its own ecosystem – a rainforest right near the coast, with huge cabbage tree palms that created an immense shaded canopy, paper barks, banksia and ancient cycads. The moisture in the air made your face and hair damp and the cicadas were so loud, we were still deaf for about 30 minutes after leaving the area! It was an amazing place to be absorbed by for a while, and it tested all our senses.

What is the sound you love the most?

I love the sound of my two rascal dogs, growling and squawking as they wrestle with each other in happy combat.

I would like to be a bird for a day. To be able to just take flight and soar over the countryside would be an amazing thrill. But it would also be pretty cool to be Freddie Mercury in 1985 at the LIVE AID gig when he had 72,000 people at Wembley stadium in the palm of his hand, singing in full-voice.

What was the name of the first live music event you attended?

My first big live concert was Billy Joel at the Sydney Entertainment Centre when I was a young teen, early 1990s. I was blown away by the music, the crowd and the venue, and literally felt like I was floating up in the rafters!

Is there a person in your life who has inspired you in a positive way?

My dear late Mum had the amazing ability to bring sunshine into the world and into people’s lives. No matter what life threw at her, she would just get on with it with as much grace and positivity as she could muster. Mum also had an unwavering sense that everything was going to be ok and she had a tremendous faith in people. Even though she had a long-term illness, she never really worried about things, was forever optimistic and was always thinking of, and doing things for others.

How can people get in touch with you?

Just email me at Kris.Gottschall@newcastle.edu.au