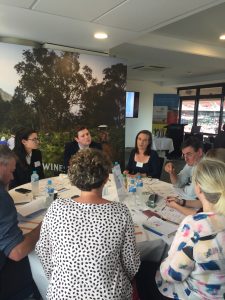 The CRRMH is looking forward to meeting with key community partners to determine the actions which need to be taken to reduce rural suicide rates.

Following on from last year’s Rural Suicide Prevention Forum at the Sydney Royal Easter Show and the subsequent launch of the CRRMH’s Position Paper on “Rural Suicide and its Prevention”, community partners will identify key issues which should be considered when planning and implementing suicide prevention strategies and approaches for rural settings.

The forum developed with the support of the NSW Mental Health Commission, is titled “2018 Rural Suicide Prevention Forum: A coalition for action” and will take place on Tuesday 27 March.

Specifically, the focus will be on three key areas as identified in the CRRMH’s position paper, including:

·         providing support to vulnerable groups in rural and remote populations,

·         building protective factors in children and young people and;

Director of the CRRMH Professor David Perkins said that the Easter Show Forum provides an appropriate opportunity to follow up and build on the excellent discussion at last year’s forum by taking the conversation to the next level of action planning.

“This year the Easter Show Forum is about bringing together influential stakeholders from mainly non-health backgrounds to discuss and review the three focus areas in more detail,” he said.

“The challenge of decreasing rural suicide is not just the responsibility of health – a standpoint outlined in our Position Paper. Everyone needs to be part of the solution.”

Politicians, industry leaders, key policy makers, representatives from government organisations and NGOs, people with lived expertise, as well as other key rural stakeholders have been strategically invited to the event to look at the issues from different perspectives.

The Governor of NSW, His Excellency General The Honourable David Hurley AC DSC (Ret’d) will attend the forum as well as the NSW Mental Health Commissioner, Catherine Lourey.

“Having these key people as well as representatives from the Indigenous community, education and industry demonstrates that a collaborative approach is what is needed if we are to reduce rural suicide rates” said Professor Perkins.

Ms Lourey said the conversation was timely as the Commission is currently developing the Strategic Framework for Suicide Prevention in NSW on behalf of the NSW Government.

“The Framework project already involves consultation with stakeholders across the suicide prevention sector in NSW including all tiers of government, Primary Health Networks, community managed organisations, clinical and professional representatives, individuals with a lived experience of attempted suicide and suicide bereavement and the broader community. This forum will add significantly to this body of knowledge.” said Ms Lourey.

Professor Perkins said the ideas discussed and suggestions made at the Forum would contribute to the NSW government framework as well as inform CRRMH research priorities and programs in rural suicide prevention.

“This is the time to take the recommendations outlined in our position paper and empower leaders and members of communities to think about how they can implement these in their own areas of work to reduce suicide attempts and deaths”, he said.

“The CRRMH welcomes the opportunity to partner with organisations that wish to take action and have a positive, downward impact on rural suicide.”