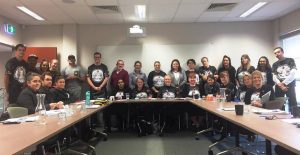 The Centre for Rural and Remote Mental Health is excited to be rolling out We-Yarn Workshops to Aboriginal communities across rural NSW. The response so far has been very positive.

What is the We-Yarn Workshop?

The We-Yarn Workshop is a suicide prevention workshop designed in partnership with Aboriginal health workers and community members. It is based on the idea that people who are thinking about suicide usually do give signs that they are in a bad space. Those around them can learn to recognise these signs and to offer the help and support needed.

How did the We-Yarn Workshops evolve?

To address this issue, We-Yarn was developed in consultation with staff from Pius X Aboriginal Medical Service in Moree, as well as Aboriginal Elders and community leaders in Moree. The workshop has undergone further change as a result of feedback and suggestions from pilots delivered to Aboriginal service providers, health workers and community.

Who runs the We-Yarn Workshops?

We-Yarn is led by two facilitators – former NRL Player Nathan Blacklock, and Fiona Livingstone who is a Project Coordinator for the Centre for Rural and Remote Mental Health (CRRMH). Nicole Turner (Australia’s first Aboriginal nutritionist!) regularly attends the workshops, too.

Who should go to a We-Yarn Workshop?

Anyone 18 years or older who is interested in having a better understanding of suicide, and how individuals and communities can help to prevent suicide. We-Yarn aims to inspire communities to become healthier on all levels, including social and emotional wellbeing. Although We-Yarn is not a healing program, some participants have reported that the workshop has helped them to deal with their own experience of suicide (either themselves or family and friends).