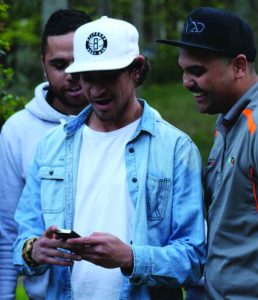 The paper, led by Richard Fletcher from the University of Newcastle and co-authored by others including CRRMH Research Associate, Donna Read, and Senior Project Officer, Nicole Turner discusses the social and emotional challenges in the transition to fatherhood that young Aboriginal fathers face, and the lack of culturally appropriate support mechanisms.

The article: Stayin’ on Track: the feasibility of developing Internet and mobile phone-based resources to support young Aboriginal fathers was published by CSIRO Publishing, Australian Journal of Primary Health online on 28 April 2017.

More about the Stayin’ on Track project

Stayin’ On Track is an online resource developed by Aboriginal men for Aboriginal dads.

The aim of Stayin’ on Track is to help young Aboriginal Men in their transition to fatherhood by providing support through the website and a smartphone app, Mood Tracker.

According to pioneer researcher in fatherhood, Dr Richard Fletcher from the University’s Family Action Centre, these young men often face difficulties in assessing appropriate resources to help them address their issues.

“Nobody has asked young Aboriginal men which websites are useful or engaged this group in developing resources.

“This project is unique in using the young Aboriginal fathers themselves to build a website. The project piloted a Mood Tracker to identify fathers in distress with young Aboriginal men. We know they use mobile phones”  Dr Fletcher said.

The films of young Aboriginal fathers produced during this project, describe their role during pregnancy as well as the birth and fatherhood, are also available as part of a Stayin’ on Track website.

The project has been funded by Young and Well Co-operative Research Centre, the University of Newcastle NSW, and Microsoft.