If you are living in rural and regional Australia, you are at a higher risk of suicide than your friends and family living in the city. You have less access to services and mental health care and the stigma around suicide is still significant. So how can we save more lives? In this episode we take a look at this issue and hear from some of the speakers at a forum the Centre facilitated earlier in the year at the Sydney Royal Easter Show.

Listen to this episode:

Fiona Livingstone is the Project Coordinator for Good SPACE – a suicide prevention program for rural communities. Having lived on a farm for over ten years, Fiona understands first hand the unique stressors of farming. Fiona also brings a special lived experience of suicide to the work. Fiona has been in her role with Good SPACE for over four years and is based in Inverell NSW. Fiona is committed to the prevention of suicide, and believes that it involves the whole community, not just professionals. Fiona is passionate about educating communities in the awareness, understanding and prevention of suicide.

David Perkins is Professor of Rural Health Research and Director of the Centre for Rural and Remote Mental Health, University of Newcastle which is located in Orange New South Wales.  He is editor of the International Journal of Integrated Care.  He has worked as senior health service manager in the UK and has held academic positions in England and Australia.   He publishes in the fields of health service integration, service design and policy and is a member of the NSW Minster’s Advisory Committee on Rural Health. He is a Board Member of the International Foundation for Integrated Care and leads IFIC Australia.

Richard Buss is the General Manager Mental Health & Drug and Alcohol Service and Stream Services for the Northern NSW Local Health District. He has been working in mental health for over 20 years as a clinician and in a managerial capacity.

Richard began his career as a psychologist in mental health as an Adolescent Mental Health worker. He has worked in both extended care and acute care settings.

A quarter of people in NSW live outside the major centres of NSW.  Living in rural and remote communities can come with many lifestyle benefits, but it can also be challenging when it comes to accessing services.

The reported prevalence of mental illness in rural and remote Australia appears similar to that of major cities. Access to mental health services are substantially more limited than in major cities. Tragically, rates of self-harm and suicide increase with remoteness. [1]

Living in rural, regional or remote communities, you are unlikely to find the array of services that people in the cities can access, and factors such as transport can also become a barrier to accessing appropriate care. Being familiar with health services in your area and other online support will help you prepare for when they are needed. Being prepared for your appointment will also help.

You can find a guide on preparing for your GP appointment HERE as well other downloadable resources.

Although these areas may have fewer services, recent findings by Suicide Prevention Australia have found that regional and rural residents have significantly greater knowledge of suicide  prevention than those in capital cities. 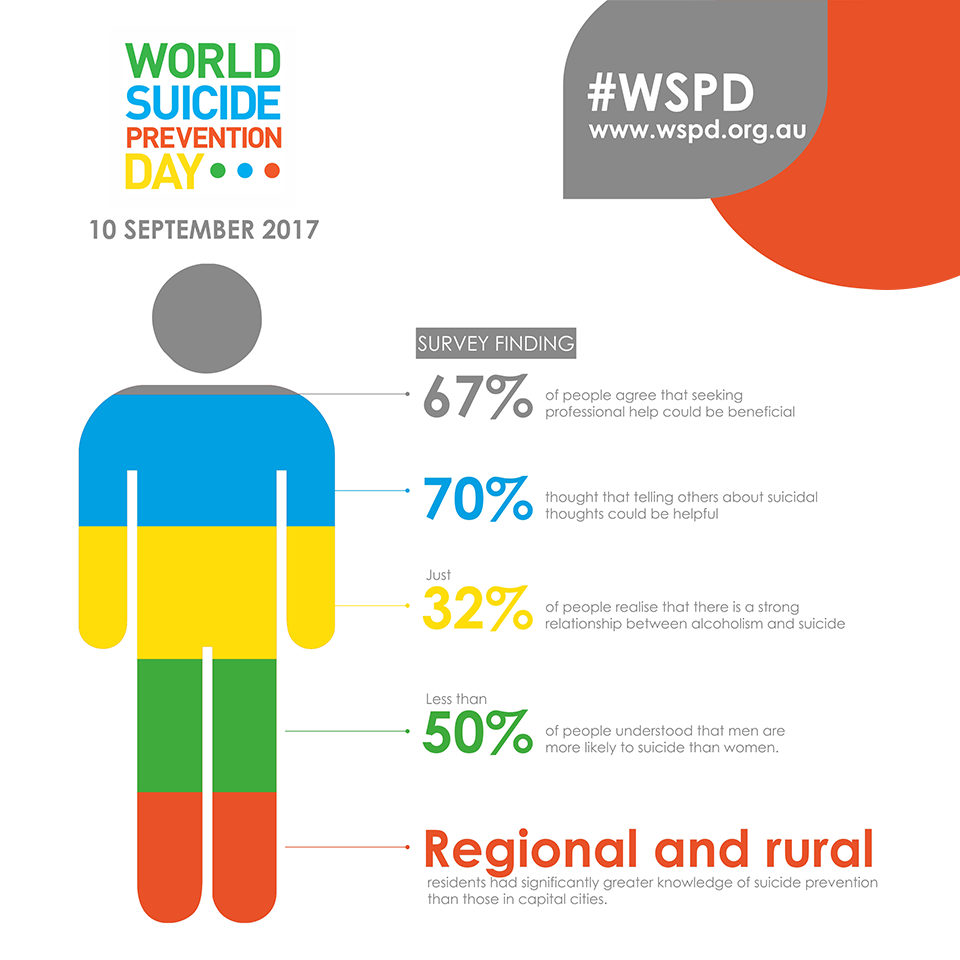 Many people who live in regional areas pride themselves on their resilience. Rural communities are challenged by the elements much more than people living in cities. They are more likely to be directly affected by the impact of droughts or floods. Entire local economies – especially those based on agriculture – may depend on the weather.

Living and working to the rhythm of climate cycles requires great personal strength, and this toughness can translate into a reluctance to admit vulnerability or seek help when in trouble. Mental health difficulties may be interpreted as weakness by people who expect themselves and others to push through times of trouble, and who may therefore be hesitant to seek or offer support for psychological distress.

Compounding this reticence, people in small communities avoid seeking help from professionals who are already known to them as neighbours or through local networks. People may fear their difficulty will be revealed, and that this will reduce their standing in their community[1].

Listen back to Disaster Trauma, to hear about how others have coped through natural disasters.

In September, the nation tends to shine a light on suicide prevention, with R U OK DAY and World Suicide Prevention Day, although it is important to continue these conversations throughout the year.

In 2017, the theme this year on World Suicide Prevention Day was ‘Take a minute, Change a life’.  Rural Adversity Mental Health Program (RAMHP) Coordinators based around rural and remote NSW recorded messages to encourage and motivate people with ideas on how to help themselves and others. You can check these on our RAMHP facebook page

R U OK have developed a simple 4 step tool to help you approach having a conversation with someone who you think needs some help with their mental health.

Watch RAMHP Coordinator Camilla Kenny talk to Nine News about why it is it important to check in with someone.

In NSW, there are a number of initiatives established to support suicide prevention in rural and remote communities. Here are a few that feature in the 2017 Glove Box Guide top Mental Health .

Our Healthy Clarence is an initiative to reduce suicide and to provide help post-suicide for the region. Since early 2015 the Clarence Valley community has experienced higher than state average rates of suicide.

RAMHP Coordinator Sam Osbourne is one of the drivers behind Our Healthy Clarence, helping to raise the visibility in the community. Sam attended Grafton Saleyards to help engage with the rural community on these issues. The initiative also includes several new projects such as pop up drop-in spaces in Grafton and Yamba and Headspace.

You can head more about this program here.

The Ripple Effect is an online intervention designed to investigate what works to reduce the self-stigma (negative attitudes you have towards yourself) and perceived-stigma (negative attitudes you believe others have about you) among males from the farming community, aged 30-64 years, who have been bereaved by suicide, attempted suicide, cared for someone who attempted suicide, have had thoughts of suicide, or been touched by suicide in some other way.

Read about the Ripple Effect here

If you or someone else is in immediate danger, call 000 or go to your nearest hospital emergency department.

If you’re concerned about your own or someone else’s mental health, you can call the NSW Mental Health Line 1800 011 511 for advice.

Having a tough time and need someone to talk to right now? The following services can help. They are confidential and available 24/7.