You are here:
Home  /   Blog  /   What suicide prevention work means to me

What suicide prevention work means to me

My name is Fiona Livingstone, and I’ve been working with the Centre for just over five years now. My current role is the Suicide Prevention Program Manager – managing and delivering services for both the Good SPACE and We-Yarn suicide prevention programs.

Whenever I meet new people either at events, through friends, or at celebratory occasions like weddings and parties, I often get asked one of the standard questions – “What do you do (for work)?”  When I tell them that I work in suicide prevention, I get a number of responses and reactions, but one of the most common replies is “wow, that must be hard.” The thing is, I see my role as being many things, but one of them isn’t that it’s hard. You see, 15 years ago, my beautiful Dad took his own life. Nothing is harder than that. 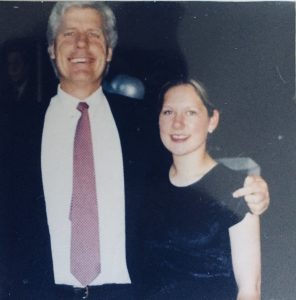 Fiona with her father at her year 10 formal.

Like most people who lose a loved one to suicide, I didn’t want my Dad’s death to be in vain. I didn’t know exactly how I would do this, until I had the opportunity to work on a suicide prevention program – Good SPACE (known at the time as Farm-Link). When I first experienced suicide prevention education for community, I remember thinking ‘wow, if I had have learnt this information and these skills, I really think I could’ve saved my Dad’. I didn’t say this from a place of blame, because you can only do what you can with what you know at the time, and as I so often say to people bereaved by suicide ‘if love alone was strong enough to save anyone from suicide, very few people would die this way!’

Because of my multiple experiences around suicide (with the driving force being the loss of my Dad), I am in quite a unique position. One of the things I love about my job is that I get to contribute to suicide prevention on a community level. I really resonate with the general community that I deliver suicide prevention education to, because I used to be one of them. I can strongly relate to the fears they have about talking openly about suicide and intervening with those they think might be at risk. I remember all too well once believing the many myths about suicide, such as ‘if you talk about it you might put the idea in their head’ and ‘the ones that talk about it never do it, it’s the quiet ones you have to watch’ and ‘if they’re going to do it then they will and there is nothing you can do about it’.

I believe these myths are responsible for an untold number of deaths by suicide. I also used to think that a ‘type’ of person took their life, and that type of person certainly didn’t include my Dad – until it did. I also thought that 100% of care and support for people who were suicidal rested with health professionals. While we need the support of, and access to, health professionals, they’re only part of the support a suicidal person requires. Equally as important is the availability of caring, supportive and non-judgmental people. It is said that suicide prevention belongs in the community, and I couldn’t agree more. Every single one of us has a role to play.

There are aspects of my job (like any job!) that can be stressful, but for me, talking to people about suicide is not one of them. These are the parts of my ‘job’ that I consider an absolute privilege and an honour. To be a part of changing peoples’ attitudes about suicide and mental illness, and potentially preventing some people who are suicidal from feeling alone, and potentially preventing some people from experiencing the trauma and devastation that follows a suicide, is a true privilege. You know you are in the right job when it doesn’t feel like a ‘job’! I often say that if I won lotto and never had to work again, I would still do what I do. 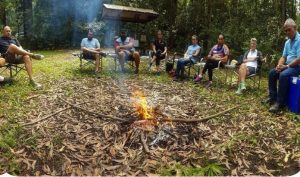 The thing about jobs though, is that you can love the actual job itself, but it is quickly made unbearable if you don’t have the right team and support behind you.  Behind everything that I get to do within my role (including service delivery and management) is a team of people I work with. There is my own close-knit team of other facilitators, and those who coordinate every aspect of a workshop and program delivery.  Then there is the staff at the Centre! The administration team helps us with things like budget, travel arrangements and invoice payments. The research team informs us of the latest research, ensures that we can evaluate our programs, and publish our work. The communications team helps to put our programs on the map, organising interviews and media opportunities, as well as things like brochures and websites. Then there is the support of the Senior Advisor, Trevor, who has helped to build our programs to where they are, sharing the knowledge he has built throughout his years in the industry. We also are lucky enough to have a Director who supports what we do and is there to assist when needed!

All in all, I am a very lucky lady. I get to do work that is so meaningful to me, with a dedicated team, and I know beyond any doubt that my Dad would be so proud. He used to love being in the limelight, and now his story has been heard by thousands, and his legacy continues to grow.

3 responses to “What suicide prevention work means to me”