You are here:
Home  /   Blog  /   We asked rural residents “What’s your biggest concern about climate change?” – Here’s what you said

We asked rural residents “What’s your biggest concern about climate change?” – Here’s what you said

You may have heard about the Australian Rural Mental Health Study (or ARMHS for short)? It is a unique, extensive study that was administered by the Centre for Rural and Remote Mental Health (CRRMH). The ARMHS was a longitudinal study with four waves of surveys from 2007 to 2013. The main objective of the ARMHS was to investigate the determinants of mental health in rural NSW. The first three waves of the study occurred during the Millennium Drought, and by the third wave it was obvious people were severely affected by the drought. The figures below show the varying drought conditions in NSW during the ARMHS. 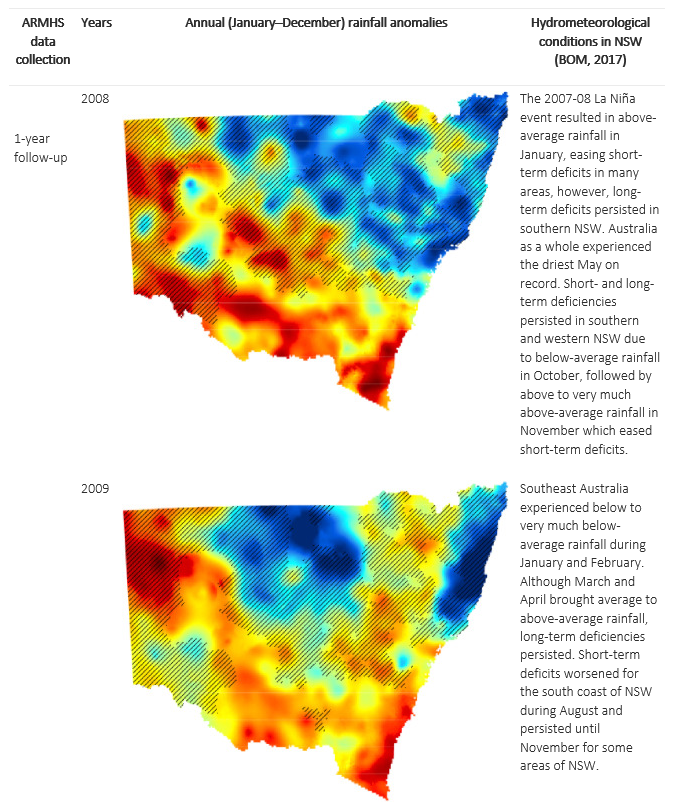 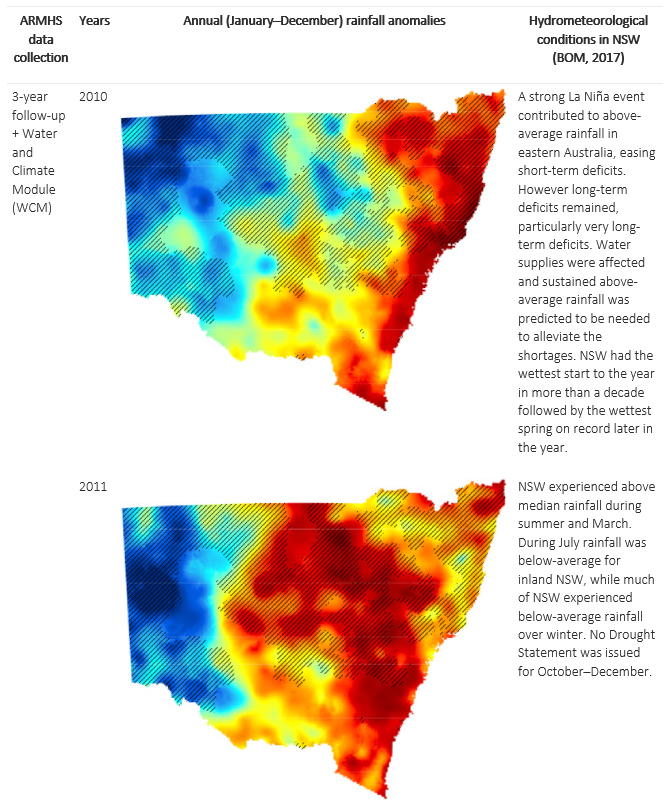 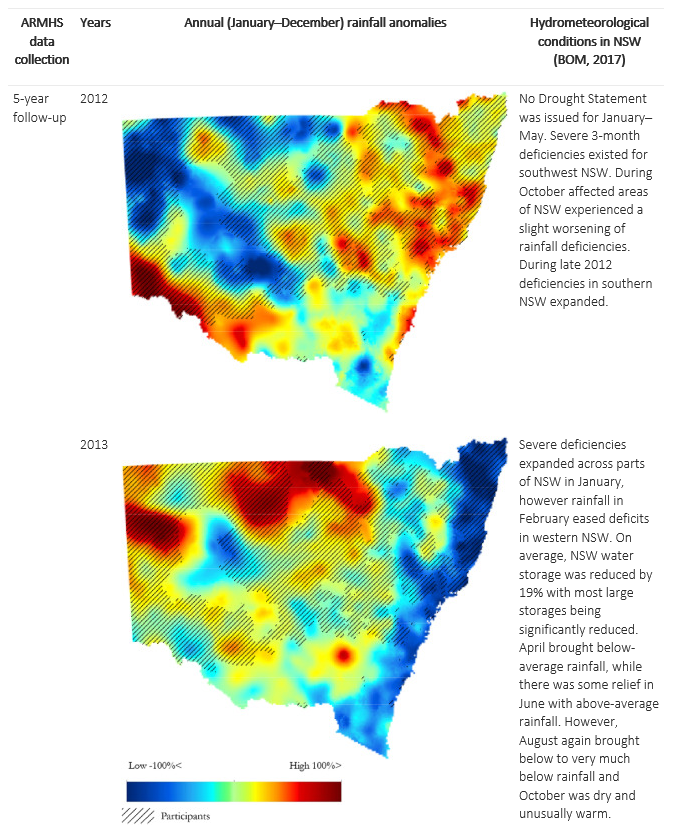 Some research suggests that there may be changes in the duration, frequency and magnitude of drought in the future as a result of climate change – but lots of research also shows that large uncertainties also exist around if/how/where/when drought could change. For this reason, the survey at the third wave of the ARMHS asked the question “What is your biggest concern about climate change?”. The ARMHS researchers were interested in finding out if climate change, and specifically if impacts such as drought, flood, and bushfires, were of concern to rural residents and how these concerns might impact their mental health. We recently published a paper that summarises the responses from this question, and groups the key concerns experienced into four themes, which are summarised below.

The study population included 823 participants from non-metropolitan NSW who wrote an answer to the question “What is your biggest concern about climate change?” The spatial distribution of participants is shown in the below figure. 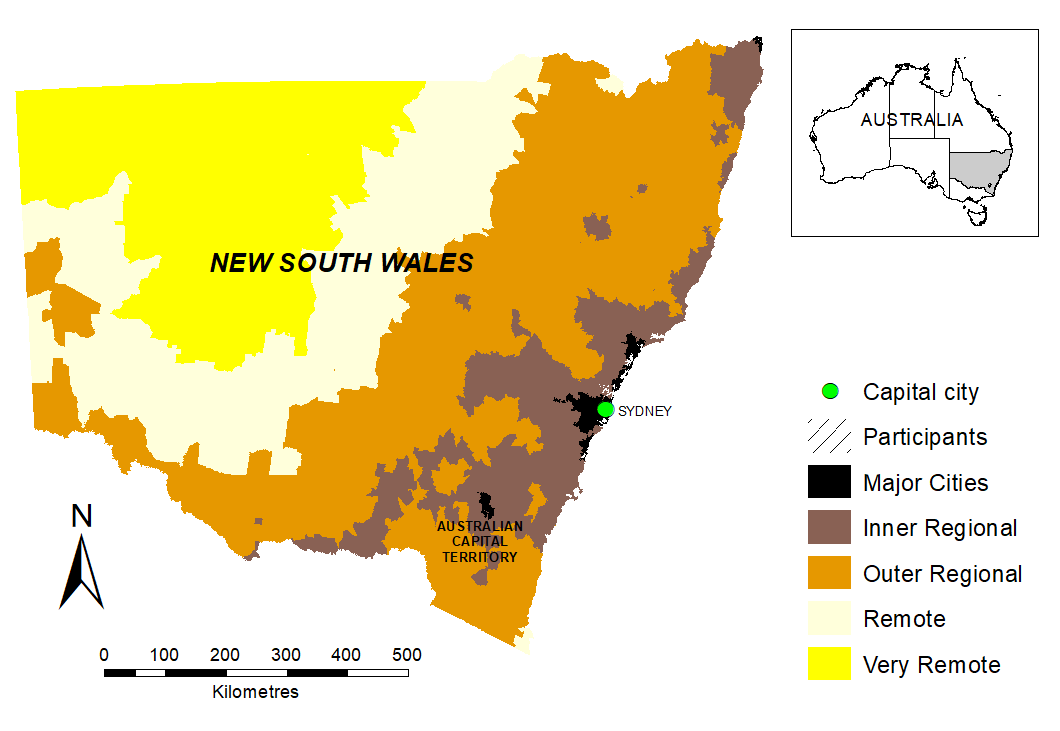 Location of study population in New South Wales according to postcode and remoteness area (ABS, 2006)

The four key themes and example quotes that demonstrate the themes are shown in the below table.

Participants commented that “farm and rural communities are harmed”, connecting suffering to rural identity and increased vulnerability as a result of location. Issues in rural communities are exacerbated by financial concerns, which were dominant across all themes, and the flow-on effects of these were apparent.

Theme 3 – Water-related extremes of climate change – Participants expressed concerns related to the extreme events associated with the impacts of climate change, such as (not ranked) drought, flood, storms and sea-level rise. When responses to the question included references to weather and climate-related impacts, most participants’ concerns were connected to water.

Theme 4 – Leadership and action to address climate change – A dominant concern for many participants was the federal and state governments’ responses (or lack thereof) to climate change. There was a paradox of opinions where participants were either angry about policies to mitigate anthropogenic climate change which they felt were costly or unnecessary (“It’s an excuse for politicians to raise more taxes”), or conversely, that there was “not enough government incentive for change”, for example, in relation to renewable energies and research. Concerns about suffering because of climate change were expressed together with concerns about suffering being exacerbated by politics and government, and that rural communities would suffer most.

What’s next? In late 2018 – early 2019, we conducted an online survey in NSW that focused on peoples’ experiences of the current drought. In the survey, we asked the same question “What is your biggest concern about climate change?” We are currently analysing the responses to this question and will be publishing a follow-up paper soon. The second paper will again identify rural residents’ main concerns about climate change but will also examine change over time and how the concerns from 2010 – 2011 have changed (or not) compared to more recent concerns.

If you have any questions or would like to provide feedback please get in touch at Emma.Austin@newcastle.edu.au

If you are interested in other outcomes from the ARMHS you can access all the papers published using ARMHS data here.